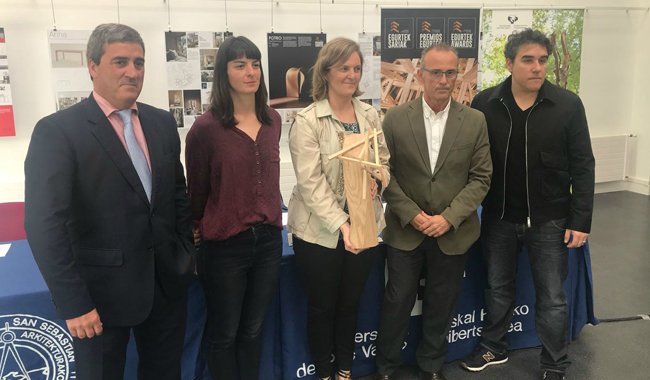 The Jury has commended the high quality in the more than 120 projects submitted, on display in the Donostia School of Architecture

Egurtek, the International Forum on Architecture and Construction in Wood, which will celebrate its 7th edition on 18 and 19 October, 2018 at Bilbao Exhibition Centre, announced the winners of the 4th edition of the Wood Architecture Awards, which recognise the best works in five categories: “Building”, “Publication”, “Product Design”, “Local Wood (Basque Quality)” and “Interior Design”, a new category added this year. Specifically, 123 panels were submitted to the competition, in their different categories, compared with 88 in 2016: 58 in Building, 36 in Interior Design, 27 in Design, 4 in the Publication category, and 33 in Local Wood (Basque Quality). The Jury highlighted “the high quality of all the projects submitted and the sensitivity shown in the use of the wood in all of them”.

In the Building category, the award went to “Two Cork Houses in Llafranc, Girona”, submitted by Emiliano Lopez and Mónica Rivera. This work was positively evaluated due to its expressiveness and integration into the surroundings, its successful implementation in a responsive environment and an exemplary choice and application of materials. In this category, the Jury awarded runners-up to “Impluvium Community Centre at Reinosa, Cantabria”, from authors Begoña de Abajo and Carlos García, to “Bos d’en Pep Ferrer at the Migjorn Beach, island of Formentera”, from author Marià Castelló Martínez, and to the “New FINSA headquarters and head offices in Santiago de Compostela, A Coruña”, from authors Miguel Alonso Flamarique, Roberto Erviti Machain, Mamen Escorihuela Vitales and Antón Varela García.

In the new Interior Design category, the award-winning submission was “Architecture Workshop in Pamplona, Navarre”, by Xavier Chérrez and Raquel Cantera, which made full use of the storage and work space with an ingenious solution based on the virtues of wood construction.

In the Wood Design category, the prize went to “POTRO”, a work from designers Gerard Bertomeu, Miriam Cabanas and Xavi Santodomingo, due to the simplicity of the design feature through an accurate reference based on a technological innovation.

For its part, “ARINA, a table for homes of today”, from designer Silvia Ceñal, won the special price for Local Wood (Basque Quality). The members of the Jury emphasised the proper resolution of the element with some predefined limitations regarding the species and size of the wood.

The Publication category intends to identify the dissemination of the use of wood in construction from graphic media, print media and audio-visual or digital media. In this section, the award went to Miguel de Lozar de la Viña, for his research work “La cabaña moderna. Pequeñas arquitecturas en busca de sentido” (The modern hut. Little architectures in search of meaning), which shows the role of wood in the architecture of the modern movement based on the recurring theme of the primitive hut.

Information panels of these works will be displayed in the foyer of the Higher Technical School of Architecture of the UPV/EHU, at the Gipuzkoa campus.

Participating in the Awards Jury were leading experts in the fields of architecture, design, manufacturing and wood from institutions such as the Official Basque-Navarrese Architects Association, the University of the Basque Country UPV/EHU; the Basque Timber Association, Infoedita professional communications Group, Bilbao-Bizkaia Design & Creativity Council, Arrokabe Arquitectos, the Association of Decorators and Interior Designers of Bizkaia, and EIDE-Basque Association of Designers.

Since its origins in 2012, Bilbao Exhibition Centre, the Official Basque-Navarrese Architects Association and Baskegur, with sponsorship from the Basque Government’s Department for Economic Development and Infrastructures, have sought to reward the leading wooden architecture projects with a dual objective. On one hand, to foster debate on the use of this material within the professional groups, and, on the other, to make the experience gained in this field in countries around the globe visible to society.

On 24 May the jury reached its final decision in the selection of the work that will serve as the trophy for the EGURTEK AWARDS. It was a competition among students of the Faculty of Fine Arts of the UPV/EHU in which Silvia Alonso Altuzarra was selected as the winner among the 20 pieces of work submitted. Students Leire Grijalvo and Joana Akaiturri, who were finalists, also received special mention.

During the course of this initiative carried out jointly by the University of the Basque Country, Egurtek and Baskegur, several Fine Arts students worked the wood, during two four-month periods, with the idea of creating something that could be reproduced and delivered as a trophy to the five winners of Egurtek 2018, and possible future editions.

The Jury for the Egurtek Awards carvings comprised representatives from the Official Basque-Navarrese Architects Association; Baskegur, Bilbao Exhibition Centre and the University of the Basque Country UPV/EHU.

The Egurtek 2018 conference programme includes distinguished professionals from the world of architecture such as architect Tszwai So, from Hong Kong, who will explain his part in the Belarusian Memorial Chapel project in north London, undertaken on the occasion of the 30th anniversary of the Chernobyl nuclear disaster, as well as his experience in researching the indigenous wooden churches of Belarus.

Finnish architect Janne Kantee will exhibit his work “Hotel Lodge” which, after suffering a fire was reconstructed with Finnish wood based on its original structure, managing to be integrated perfectly into the environment. This lodge, an alpine wood design, is the only one of its kind in Sierra Nevada.

Among the speakers, it is also worth mentioning the participation of Portuguese architect Carlos Castanheira, who is particularly attuned in the use of wood in many of his works.

In addition, Dutch architect Lidewij Lenders will exhibit examples of his own projects in which wood was used with “intelligence and balance”, as is the case with “the corner house in Steiger”, in the Netherlands, built entirely of wood and employing all the raw materials used for renewable buildings, whose construction is in itself a wooden frame with solid spruce wood laminated floors.

Victor Orive, a London architect from the Zaha Hadid studio, will exhibit his “The New Lawn” project which is set to become the stadium of the Forest Green Rovers, a fifth division football team in England. It will be built entirely of wood, due to the club’s ecological principles with respect to nature, and will meet all the requirements of sustainability and caring for the environment.

At the national level, there will be guest speakers like Oscar and Iván Andrés Quintela, from Arrokabe Architects, winners of the 2016 Egurtek Building Award . Also giving an analysis of their experiences will be the Navarrese architect Carmelo Fernández Militino, responsible for designing, in Hondarribia, the largest CLT wooden structure in south-east Europe, and Beatriz Bergasa and Leire Badiola from Guipuzcoa, who, from their architectural office Satie Arquitectos, have undertaken numerous projects in wood, most notably the remodelling and extension of Bodega Fos. Here wood is a nexus of union between nature and the building itself, with an eminent structural and aesthetic prominence.

Egurtek 2018 will also include a technical workshops programme where issues will be discussed relating to the wood sector, with sessions on “Training in the forestry/timber sector”, “Forest Bioeconomy” and “Wood Design”, among others. In addition, Egurtek 2018 will have an exhibiting area with around 60 companies in attendance.